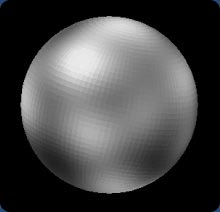 Pluto is the ninth planet in the solar system and the farthest planet from the Sun. The average distance between Pluto and the Sun is over 3.5 billion miles. Therefore, it takes Pluto 248 Earth years to complete one orbit. The planet does not spin very fast, so a day on Pluto lasts about 6 Earth days. Pluto spins in the opposite direction that Earth does, so the Sun, which is hardly visible from such a large distance, rises in the West and sets in the East. Pluto is the smallest planet in the solar system, about one-sixth the size of Earth. Pluto’s only moon, Charon, is almost the size of the planet itself, so scientists sometimes refer to the two as a double planet. Pluto is very dark and very cold with a thin atmosphere. Due to its extreme distance from Earth, it is the only planet that has not yet been studied with spacecraft.