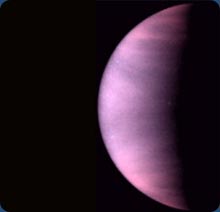 Mercury is the planet closest to the Sun. Less than half of the size of Earth, it is the second smallest planet in the solar system. Mercury has very little atmosphere, and similar to the Moon, has a dusty surface covered with craters. These craters are the result of years of steroids and other objects hitting the planet. Beneath the rocky layer, Mercury is mostly comprised of iron. The weather on Mercury has extreme variations—between 950 degrees Fahrenheit at its hottest and less than -300 degrees at its coldest. Mercury’s orbit is elliptical, which means that there is a lot of variation in terms of the distance between the planet and the Sun. At the closest point in the orbit, the distance is about 27 million miles, and at the furthest, this increases to about 41 million miles. This orbit takes only 88 days, compared to a year on Earth which lasts 365. However, Mercury does not spin as fast as Earth, so a Mercurian day (the time it takes for the planet to make one full rotation) lasts 59 Earth days.